This paper extended the findings of other gene therapy studies in Wiskott-Aldrich Syndrome (WAS). A previous paper described 3 patients with milder WAS who were treated with the same vector. WAS is scored on a scale from 1 being the least severe to 5 being the most severe, and the patients in the original study were all scored either 3 or 4. This new study included 7 patients, 6 of whom had a WAS clinical score of 5, and one with a score of 3. The approach is very similar to that of bluebird, both use self-inactivating HIV-based lentiviral vectors to introduce a functional copy of a mutated gene into CD34+ blood cells collected from the patient & then reinfuse them after the patient undergoes myeloablative conditioning. Both this and the previous WAS study using this vector showed good safety, with "highly polyclonal" insertion sites, and no evidence of clonal expansions. I plan on writing up a longer post more specifically on the safety of these types of gene therapy approaches. In terms of efficacy, here, as well as the previous paper, demonstrated the ability of this approach to improve clinical symptoms. All 3 of the milder patients treated in the previous study broadly had resolution of the multitude of symptoms typical of WAS. In the current paper, 6 of 7 patients had significant improvements in their symptoms, with 1 patient unfortunately dying due to a pre-existing viral infection a few months after receiving the gene therapy. The 6 patients who were able to be followed for up for longer periods of time had the majority of their symptoms resolve or significantly improve, with the exception being low platelet levels remaining relatively low. The authors tried to correlate the improvement specifically for platelet levels to the cell dose the patients received, but the correlation was not very impressive for me to make that conclusion. They also showed that the average vector copy number of peripheral blood cells stayed relatively constant from 10 months out to ~45 months for the longest followed patient. My general thinking has been that vector copy number (quality of the cells) is more important for the peak expression of the gene product, whereas the cell dose (quantity) might correlate more with how fast they recover post-transplant & reach peak expression of the gene. For instance, the cell dose will most likely be lower in bluebird's sickle cell trial vs. B-thalassemia trial because the CD34+ cells need to be collected from bone marrow instead of mobilized blood, which generally results in fewer cells. In general, though, this paper further demonstrates safety and efficacy of a lentiviral-transduced HSC gene therapy for a blood disorder, WAS.
Mutant MHC class II epitopes drive therapeutic immune response to cancer
http://www.nature.com/nature/journal/vaop/ncurrent/full/nature14426.html

Neoantigens are increasingly being realized as the key targets of the endogenous immune response against cancer. A number of others, such as @PDRennert & @MikeNGladstone have written on neoantigens in cancer here, here & here. Neoantigens are formed from the specific mutations in a patient's tumor. Our ability to predict & validate the immunogenicity of the mutated proteins, which can get processed into peptides that get displayed to the immune system on MHC class I & class II proteins, appears to be improving. Schumacher and Schreiber wrote a fantastic review in Science discussing neoantigen prediction and targeting in cancer immunotherapy. Since neoantigens are specific to each patient's tumor, treatment needs to be individualized to each patient. A number of approaches are emerging, such as adoptive transfer of Tumor-Infiltrating Lymphocytes (TILs), reviewed here, where neoantigen-specific T-cells have been shown to be sufficient to mediate regressions. Kite Pharma has also announced their desire to generate patient-specific neoantigen recognizing TCRs, and I wrote some thoughts on the approach here. Finally, groups are also developing vaccine-based approaches to target neoantigens, with early results from a clinical trial showing expansion of the TCR-repertoire against vaccinated neoantigens. That trial used dendritic cells pulsed with predicted neoantigen peptides for binding to MHC class I, to elicit a CD8+ T-cell response. All of this is good background for this paper, which instead used an RNA-based vaccine to induce expression of predicted neoantigen peptides that could bind to either MHC class I or class II for mouse cancer models. Some interesting findings were that they found a higher proportion of the immunogenic peptides able to bind MHC class II, and eliciting a CD4+ immune response that was able to suppress tumor growth. While the majority of the focus for neoantigen targeting has been on those that bind MHC class I, and elicit a cytotoxic T cell (CD8+) response, there is evidence from adoptive transfer of neoantigen-specific CD4+ T cells that CD4+ cells can mediate responses in patients. The final format of their vaccine was to simultaneously target 5 different predicted neoantigens (predicted to bind either MHC I or MHC II) expressed off of a single RNA transcript. This RNA pentatope vaccine significantly suppressed mouse tumor growth, with evidence of an increased anti-tumor immune microenvironment.

Interestingly, they found the vaccine induced an increased CD8+ response against a previously characterized MHC I neoantigen that was not directly targeted by the vaccine. This suggests the vaccine induced antigen-spreading, where an initial immune response against the tumor triggers an immune response against additional antigens. When looking to apply this approach to human tumors, the group looked in the TCGA database to see if human tumors would have sufficient MHC I or II neoantigens based on their prediction method, and they found that there were frequently numerous neoantigens that could potentially be targeted across a range of malignancies. The approach is being commercialized by BioNTech, which has started clinical trials around this approach, including a phase I here.

This paper took a clever approach to target the "undruggable" loss of p53, which so frequently occurs in tumors. While tumors frequently have genetic deletions of one copy of the TP53 gene, this deletion tends to span greater than just the TP53 gene. The authors looked for other genes nearby that might get caught in the deleted region, looking for ones that might be "housekeeping" genes that are necessary for cell viability. They found POLR2A, a component of RNA Polymerase II to frequently be co-deleted with p53, and speculated that this might cause increased sensitivity to Pol II inhibitors.

When they tested cell lines with hemizygous loss of POLR2A, they found those cells were more susceptible to inhibition of Pol II by knockdown of POLR2A, or by inhibition with α-amanitin, the deadly fungal toxin. α-Amanitin causes liver toxicity, so they tested an EpCAM antibody-α-amanitin conjugate to improve the therapeutic index. They found this ADC had activity in a number of xenograft models, specifically when POLR2A was deleted. Targeting the unintended consequences of the process of tumorigenesis, such as the previously mentioned neoantigens, or in this case deletion of passengers, is an interesting approach since it increases the number of potential targets. These mutations, however, might not have the selective pressure to be maintained in the tumor, potentially allowing for escape. For further reading, here is a very similar approach that targeted the vulnerabilities exposed by homozygous deletions of redundant housekeeping genes.

The successes of immune checkpoint inhibitors, such as anti-CTLA4 or anti-PD1 antibodies have caused a surge in the search for ways to re-activate the endogenous immune response against cancer. A key immunosuppressive cell thought to be important in tumor progression is the regulatory T cell (Treg). Additionally, part of the mechanism of CTLA-4 antibodies may be through antibody Fc mediated killing of CTLA-4 positive regulatory T cells. While a lack of regulatory T cells causes severe autoimmunity, in mouse models, transient depletion of regulatory T cells reduced tumor growth, while not inducing substantial autoimmunity. This was accomplished with mouse genetic engineering, and so this strategy cannot be directly implemented in humans. Targeting Tregs appears somewhat difficult due to lack of a good surface marker to target. This paper sets out instead to try to inhibit their immunosuppressive activity. It's been previously shown that TGF-β1 is an immunosuppressive cytokine that is produced in an inactive state, but can be activated by Tregs. Direct targeting of TGF-β1 might be dangerous due to important roles in other cell types and situations, including being actually tumor suppressive in premalignant cells. To specifically target Treg activation of TGF-β1, the authors attempted to block the interaction of TGF-β1 with GARP, a protein only Tregs use for activation of TGF-β1. They generated 31 monoclonal antibodies against human GARP, and found some that could block the interaction & significantly diminish human Treg immunosuppressive activity in vitro and in vivo, using a model of GVHD. They couldn't test the antibody's ability to reduce tumor growth in any mouse models of cancer because the antibody doesn't cross react with mouse GARP, so they couldn't inhibit mouse Tregs. This, and potentially other, approaches to either depleting Tregs or inhibiting their function will be interesting to follow as potential cancer therapeutics.


Other interesting papers this week:

Two papers on microdevices that can simultaneously inject very small doses of different chemotherapeutics into tumors, in a spatially-separated fashion, to predict chemotherapy response:
An implantable microdevice to perform high-throughput in vivo drug sensitivity testing in tumors
http://stm.sciencemag.org/content/7/284/284ra57.short 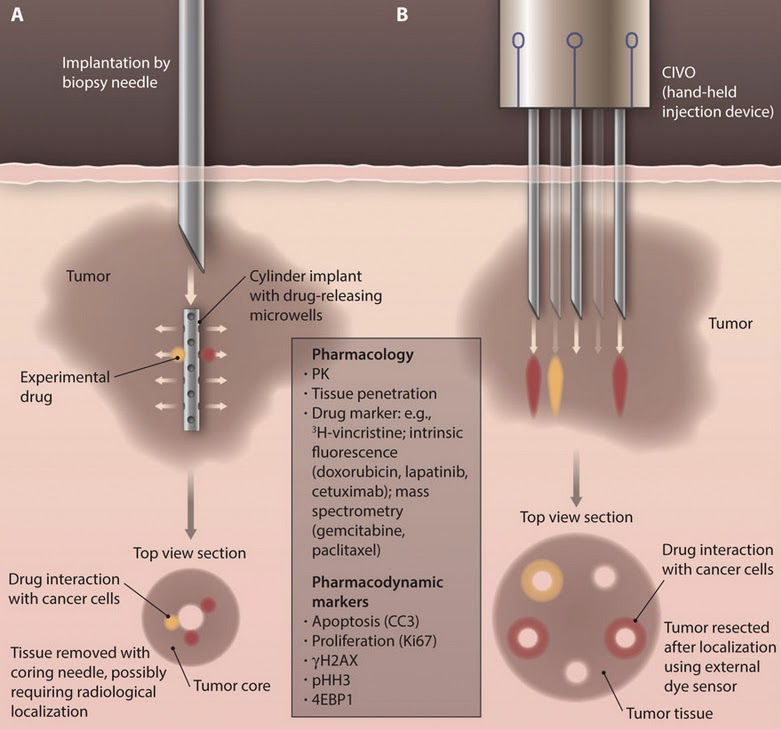