$KITE Some thoughts on today’s announcement on neo-antigen targeted TCRs.

First, I do not study cancer immunology, but I enjoy following & learning about different therapeutic approaches, and approaches such as adoptive transfer of T-cells are very interesting.

Kite Pharma today announced they are expanding their CRADA with the NCI to work on developing T-cell receptor (TCR) product candidates that are designed to target neo-antigens specific to each patient’s tumor. This is a fundamentally different approach from the current wave of TCR product candidates currently being developed by $JUNO or $KITE.

While the aberrant expression of these different classes of proteins all provide potential targets for TCRs, there is increasing evidence that the endogenous T-cell response against the tumor is actually against neo-antigens, which are produced by the processing of proteins that are mutated specifically in the tumor. This is supported by the observation that Tumor Infiltrating Lymphocytes (TILs), which have also been used as an adoptive T-cell therapy, react against neo-antigens specific to tumor mutations: http://www.ncbi.nlm.nih.gov/pubmed/23690473, http://www.ncbi.nlm.nih.gov/pubmed/23644516. Additionally, it is believed that the T-cells that are reactivated by checkpoint blockade, such as PD-1 antibodies, also are reacting against neo-antigens: http://www.ncbi.nlm.nih.gov/pubmed/25428507. 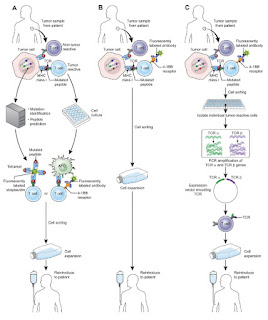 From the press release from Kite, it appears they will explore making neo-antigen specific TCRs, most likely using something similar to workflow C in the figure posted in the previous tweet. This figure comes from a very nice review of TCR, CAR-T & TIL approaches, which is publicly available & I would definitely suggest a read: http://www.ncbi.nlm.nih.gov/pmc/articles/PMC3920180/
This means that each patient would get a TCR product that is unique to that patient in the sequence and specificity of the TCR transduced into their T-cells. To me, this seems like a potentially daunting manufacturing challenge.

Workflow A has actually already been applied, quite successfully, in a single patient, and this was published in Science last year: http://www.sciencemag.org/content/344/6184/641

As far as I know, no data has ever been published on a patient(s) being treated by workflow C, so we’ll have to see how this approach actually plays out. I would keep an eye out for further publications from Rosenberg’s group, as they might publish on further developing this approach.

So why add the extra steps of identifying the TCR sequence and generating viral constructs to make TCR-modified T-cells as opposed to just using a mixture of TILs or purifying a specific TIL population, as in workflow A?

It’s not entirely clear to me what the advantages or disadvantages would be, but here is a list of few that I could think of, influenced by some mentioned in this other review from Rosenberg & colleagues:
http://www.nature.com/nri/journal/v12/n4/full/nri3191.html

Potential advantages of putting TCRs into T-cells vs. just using TILs:
Unique to TCRs:
1. Can put the TCR into a given T-cell population (T-cells are heterogeneous, and some populations may be better for adoptive t-cell therapy than others).
2. Can increase TCR affinity for the antigen, but this could decrease specificity
3. Potentially don’t need as many tumor-reactive t-cells to identify & clone the TCR & put this into patient T-cells → it is possible this may improve the ability to grow a T-cell product, as a TIL product suitable for use was only able to be generated from ~55% of patients with metastatic melanoma: http://clincancerres.aacrjournals.org/content/17/13/4550.full
4. Potentially already have scalable production method for TCR-modified T-cells that this workflow would feed into after a number of additional early steps.

Can be done with TILs (but requires different/extra steps, like workflow A):
1. With TCRs, you know characteristics of the receptor you put in & have a pure population of T-cells with the defined receptor → for TILs, you can achieve something similar by selecting TILs with a certain reactivity, as was done in Rosenberg group’s previously mentioned Science paper: http://www.sciencemag.org/content/344/6184/641
2. Can engineer other properties into the T-cell, such as secretion of cytokines, provide co-stimulation, prevent apoptosis, prevent immunosuppression (knockout PD-1) etc. These modifications could also be made directly in TILs as well, but again, you would be starting from a different population of cells.

Potential disadvantages to generating patient specific TCRs vs. TILs:
1. Only targeting one antigen at a time, so might be easy for selection of tumor cells that lack that antigen – especially true if the antigen is simply a passenger mutation & not driving tumorigenesis (many neo-antigens are probably just passengers). Passenger mutations would likely cost little for the tumor to lose them.

Potential advantage or disadvantage – manufacturing:
If you look at the figure posted in the previous tweet, showing the workflow of the different approaches to generating neo-antigen reactive T-cells, you can see you are adding a number of potential steps after the common step of identifying tumor-reactive T-cells. You have to generate single-cell T-cell clones, sequence the TCR & generate a new TCR retro/lenti viral construct to insert this into T-cells isolated from the patient (at this point it is the same as any other TCR product preparation). Making this feasible at a large enough scale is potentially the biggest challenge to this therapeutic approach.

In conclusion, I really like the approach of targeting tumor neo-antigens, these can serve as kind of a fingerprint of the tumor, as they are specific to the mutations the tumor has accumulated. Additionally, it is clear that the immune system can recognize neo-antigens. It will be interesting to see what approaches emerge as the best ways to generate an immune response against neo-antigens. I’d be happy to discuss more if anybody else is interested.
at 4:39:00 PM