I posted some thoughts last night before bluebird released their EHA abstract. Bluebird did, in fact, release preliminary data from their first SCD patient today. Here is the abstract, which contains a bit more detail as well. 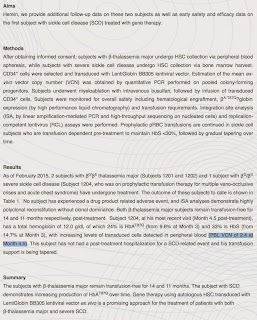 First thing to note is the T87Q percentage, which was already up to 24% at 4.5 months post-transplant. Importantly, this number is increasing, as it was up from 9% at 3 months. I would expect this percentage to continue to increase in the more mature data bluebird will present at EHA. This slower increase versus B-thalassemia is not surprising considering the lower cell dose in the LentiGlobin product infused into this patient, as mentioned yesterday. The patient is still receiving blood transfusions, which the abstract says they are tapering. This means that most likely the %T87Q would be even higher if the patient were not also receiving transfusions (not as diluted with transfused blood). It's also good to see that the patient has not had any post-treatment hospitalizations for SCD-related events, but it's probably too early to draw a strong conclusion yet on that, in addition to the fact the patient is still receiving blood transfusions.

In terms of the stock, it is reacting positively. I think seeing the increasing %T87Q is important, which I was not sure if they would report the changes over time, or just mention the current %T87Q, which on its own, I was worried might look disappointing. However, it looks like management has done a good job recalibrating expectations for the market in terms of the amount of %T87Q to expect in SCD, as this number was almost surely going to be significantly lower than in B-thal patients. Combining the T87Q & HbF percentages was over 30% of total hemoglobin, which seemed to be the threshold people were hoping to see them cross. Again, this 30% level comes from the amount of fetal hemoglobin (HbF) that is present in patients who also have hereditary persistence of fetal hemoglobin, who have a very mild disease, or are even asymptomatic - paper. I mentioned yesterday, however, why things might be a bit more complicated in directly translating this to %T87Q, but would think this level should still have therapeutic benefit.

I think it's difficult to say, at this point, why the increase in VCN is happening, or how much it's helping generate more T87Q. Presumably, since I think these numbers are from nucleated peripheral blood cells (and not red blood cells), this reflects more an increase in the average VCN at the stem/progenitor state, than representing the selective advantage of non-sickling red blood cells, which is also probably happening. One cannot probably make too much of this piece of data yet, but it probably does bode well for having a good response in this first SCD patient.

The results in this abstract were only for the HGB-205 study, which had the 2 longest follow-up B-thal patients, as well as the first SCD patient. The two B-thal patients remain transfusion independent, but not much other data was provided. I am also very interested in seeing the follow-up data on the additional B-thal patients treated in the Northstar study, particularly subject 1102, who was a "slow-responder" in terms of slowly increasing T87Q production. It will be interesting to follow this patient to get a preliminary sense of kinetics and maximal T87Q production for someone treated with a lower cell dose, which might have some relevance to the lower cell doses that will be given to patients with SCD.

Happy to continue the discussion on twitter or in the comments below.

Edit: Some additional comments based on responses:
Bluebird previously announced only HGB-205, not Northstar data will be presented at EHA, so unfortunately no follow-up on the other B-thalassemia patients. HT: @jq1234t

Also, @Sharma1981N asked: Do you think much of the increase in %T87Q from one point to the next could be attributed to decreasing % of transfused RBCs?
This is a good point, considering the HbS levels also increased to 33% from 14.7% total hemoglobin at 4.5 from 3 months, so maybe by this timepoint the patient had less transfused blood diluting both HbS and T87Q compared to 3 months. However, the total hemoglobin levels were 12 g/dl at 4.5 months, which seems in the normal range, so most likely the T87Q levels did increase considerably from 3 to 4.5 months. However, it will be good to see everything spelled out in terms of g/dl T87Q at the different timepoints, which we will presumably see in the EHA presentation. 24% of 12 g/dl, suggests they are currently at ~2.9 g/dl T87Q.