Bluebird bio presented updated data on Saturday at the European Hematology Association conference on their first sickle cell patient treated with their LentiGlobin gene therapy product with follow up out to 6 months post-transplant. I wrote about my expectations for the 6 month data in a previous post here. I also wrote short posts before and after the abstract was released containing the 4.5 month data, where I touched upon the differences between treating Sickle Cell & B-thalassemia with LentiGlobin, as well as the characteristics of the drug product the first patient with SCD received, such as CD34+ cell dose and average vector copy number (VCN).

The major point in my most recent post was that the large amount of normal HbA hemoglobin the patient received from a donor blood transfusion might obscure the actual relative amounts of T87Q the patient-derived red blood cells contained. The patient was being weaned off blood transfusions, with the last transfusion coming on Day +88, presumably just before the 3 month data was collected. The majority of the patient's blood, and thus hemoglobin, came from the transfused blood at 3 months, and as the transfused blood cells died off, the patient's own blood cells became a larger and larger fraction of their total blood. So while the %T87Q hemoglobin increased dramatically from 9.6% to 24% from 3 to 4.5 months as a percentage of total hemoglobin, it only increased from 39.5% to 42% of patient-derived hemoglobin (this only considered T87Q and HbS hemoglobin & excluded HbF since it was not reported at 3 months). The figure below attempts to illustrate what I mean about the relative amounts of patient-derived and donor red blood cells and hemoglobin at 3 vs 4.5 months: 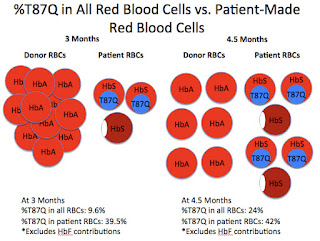 Here are updated charts from the previous post, now including the 6 month data:


The % changes as a fraction of total hemoglobin - patient & donor-derived
(assumes all non HbS or T87Q is HbA from transfused blood): 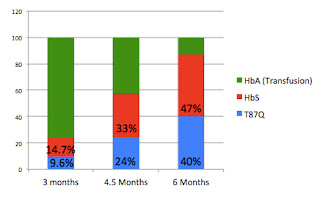 This is how the data is usually reported, the T87Q% is growing rapidly relative to total hemoglobin, but this is mainly due to the decrease in transfused hemoglobin as those cells are being replaced by patient hemoglobin from 3 months on. 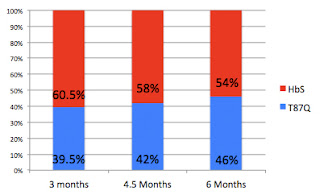 If we look at just the relative contributions of sickle hemoglobin (HbS) and T87Q, we can see that as a proportion of the patient's own hemoglobin, the percentage that is coming from T87Q is actually growing more slowly from 3 to 6 months. This excludes fetal hemoglobin, generally present at relatively low levels, and which wasn't reported at 3 months. 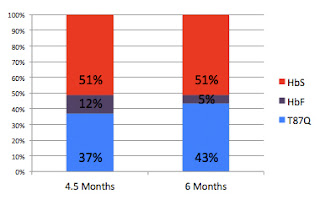 The more complete picture, with HbF added back in at 4.5 and 6 months, shows that while the amount of patient hemoglobin coming from T87Q increased nicely from 37% to 43% at 6 months, that these gains came mainly at the expense of fetal hemoglobin, with the HbS percentage remaining at 51%. I wouldn't necessarily read too much into the HbF levels showing a relative decrease. HbF is normally elevated in sickle cell patients, and perhaps if blood function is normalizing it could go down (although 5% is still elevated), but this is pure speculation. It is also possible that T87Q will continue to slowly rise, but it seems like the majority of the increase from 9.6% to 24% to 40% was driven by loss of the transfused cells more than a relative increase in T87Q versus HbS. So, speculatively, I could see it starting to plateau here around the 50% range.

So what can we conclude about the state of the patient's blood based on these numbers? Bluebird has reported promising phenotypic data, and will perhaps report more details, on the patient having markers of improving blood function, such as reduced hemolysis markers, a stoppage in pain medication, and no hospitalizations. All of this in line with reduced sickling, although I agree with others that the data is still early here.

There are a few ways to think about what amounts of T87Q will be efficacious, and for a deeper read on all of the following topics, I would suggest taking a look at the PropThink article I co-wrote with Zack (@BioTerp), it discusses more thoroughly these topics and has a lot of useful references. To briefly summarize, the major arguments come from mixed chimerism post-allogeneic transplant in SCD patients and the levels of fetal hemoglobin in Hereditary Persistence of Fetal Hemoglobin (HPFH).

I thought I'd make some minimalist images to illustrate what the red blood cells look like in all the different scenarios, and how the different types of hemoglobin are possibly distributed. Patients with SCD have two copies of sickle-mutant hemoglobin beta (HbS), whereas patients who have sickle cell trait, who only have one mutant copy of HbS, make ~60% normal HbA and ~40% HbS. Since all the cells are genetically identical, presumably the HbA is evenly distributed throughout the red blood cells. These levels and distribution of HbS are generally asymptomatic. 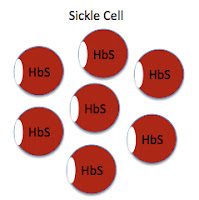 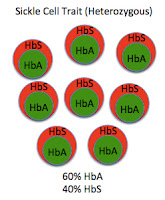 Sickle cell patients can also get blood transfusions, like the patient in the trial was receiving, and generally the goal is to keep HbS levels under 30% to reduce symptoms, particularly the life-threatening ones. In this case, you are just diluting the number of cells that can potentially sickle, but the patient's cells still contain mostly sickle-prone HbS hemoglobin. In HPFH, patients can have around 30% of their total hemoglobin come from fetal hemoglobin, which can block the ability of HbS to polymerize and cause sickling. These patients generally have a very mild disease or are even asymptomatic, which is why bluebird mentions 30% as a target threshold for T87Q levels. Since the cells in HPFH are genetically identical, most likely the fetal hemoglobin is roughly evenly distributed, and the vast majority of the cells have similar amounts of protection. 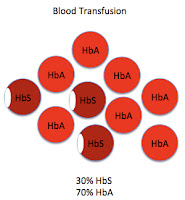 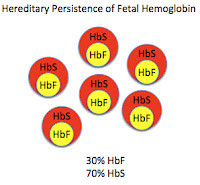 The reason that I don't think you can make the direct comparison to LentiGlobin-treated red blood cells is because the distribution of T87Q hemoglobin is most likely more heterogeneous than fetal hemoglobin in HPFH, so the cells might not all have similar levels of protection. For the initial cell product, while the average VCN was around 1, that does not mean that every stem cell had 1 copy of the vector integrated. A recent paper using a similar lentiviral approach found that for an average VCN around 0.92, only 30% of progenitor cells were actually modified with between 1 and 9 copies of the vector (the majority 1-2 copies). So in this case there will be genetic heterogeneity in the amount of T87Q vectors integrated, so most likely the expression will be more heterogeneous in red blood cells, and could affect what percentage of cells are protected from sickling.

For instance, the 40% T87Q could be evenly distributed, with all the cells having 40% of their hemoglobin coming from T87Q. Alternatively, T87Q could be concentrated in a few cells, with a significant fraction of cells being unmodified and still able to sickle. Both of those are unlikely, the first due to the heterogeneity of vector integration and the second due to the survival advantage of red blood cells that don't sickle. Most likely there will be some intermediate level of heterogeneity, but that makes me more cautious in assuming that 30% total T87Q will be exactly like 30% fetal hemoglobin in HPFH patients. 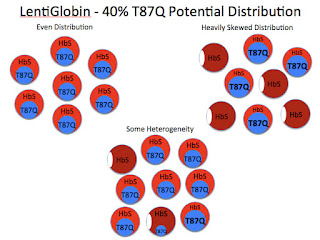 We know that there is a survival advantage of normal red blood cells versus SCD red blood cells from mixed chimerism in humans after receiving allogeneic transplants. This is the situation where a patient receives an allogeneic transplant, but not all of their stem cells are replaced, and a percentage of their stem cells come from the donor, but a percentage of their original stem cells remain. It was found that even when <30% of the patient's bone marrow was from the healthy donor, that the vast majority, frequently >90%, of their red blood cells were donor derived. These patients are generally asymptomatic, even with only small amounts of normal stem cells. This suggests there is a selective advantage for non-sickling red blood cells, which should hold true for LentiGlobin-modified RBCs with sufficient T87Q:


Corrected Red Blood Cells Should Have a Selective Advantage:

At least in this paper, which documented a handful of patients with mixed chimerism, the relative advantage of normal RBCs seemed to play out quickly with HbS dropping within 3-6 months, before reaching an equilibrium: 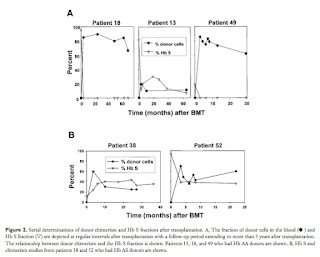 The other thing that mixed chimerism teaches us, is that you don't need to correct all the stem cells to get functional benefit approaching that seen with complete repopulation of the bone marrow by donor stem cells after transplant. The LentiGlobin-treated CD34+ cells should be above 30% corrected cells, given that their average VCN was around 1.1, and as previously mentioned, with average 0.92 VCN, there were 30% vector-modified progenitor cells by another group (although single experiment, & in vitro). However, not all LentiGlobin-modified CD34+ cells may produce red blood cells that make sufficient T87Q to completely prevent sickling in those cells. Further, the VCN appears to actually have increased over time in the patient, as at 4.5 months, the average VCN was at 2.4 in peripheral nucleated blood cells. These are not red blood cells, and should not have any selective advantage for having the vector, so this most likely reflects the current VCN in the patient's stem cells. This is also the second highest VCN seen for any patients treated with LentiGlobin, only patient 1202 had higher (with now >4 VCN). So the effective quantity of T87Q produced and number of vector-modified stem cells might be higher than would have been predicted based on the drug product given to the patient. 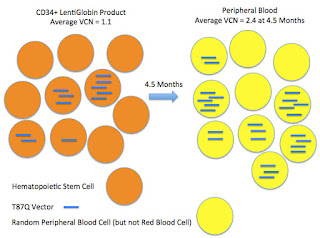 The higher, and increasing, VCN could be due to random variation, or a slight selective advantage of vector-modified stem cells. It is good to see that even patient 1202, who has had increasing VCN in peripheral blood, now over 4 VCN, does not show any sign of a clonal dominance.

I don't know if you could assume this increase in VCN will happen in all SCD patients treated by bluebird, it hasn't happened for all of the B-thal patients. So, it's possible this first SCD patient will have a better than average response to LentiGlobin in terms of the amounts of T87Q produced, but we'll have to see how this plays out with more treated patients.

In all, I think the data are a promising step forward for LentiGlobin in SCD.