Sarepta released updated data for both dystrophin measurements and clinical readouts for their 12 patient phase I/II trial yesterday prior to presenting at the World Muscle Society Conference. Before they released this new data, I wrote a post on their previously released data on dystrophin and what I was hoping to see in this new data. The clinical data Sarepta released will also be very important in the evaluation of the potential benefit of eterplirsen, but, at least for this post and the previous one, I wanted to focus on the dystrophin data. Here is the new data and my thoughts on it.

Link to their webcast of data presentation. 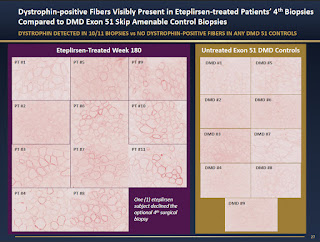 In previous data at 48 weeks, they saw all 12 patients show a statistically significant increase in dystrophin-positive fibers, but 1 of the 11 patients here did not show an increase. Steve Wilton (at 29:45 in the webcast), in reference to the Western blot data I'll get to below, suggested an explanation for why 1 or 2 patients did not have measurable dystrophin production at this time point. He thought the data was still impressive, but that there are limitations to using a small biopsy to try to represent the whole muscle, such as variability in quality of the biopsy. He also said the low detection limit of the assays (particularly Western blot), and perhaps the different underlying genetic mutations, which are not all identical for the treated patients, could play a role. In terms of my expectations, I was hoping to see continued evidence of dystrophin production across all patients, as they had seen in their earlier data, but the limitations of biopsy are reasonable, as there is local variability in muscle condition.

As opposed to their initial set of 3 biopsies, for the 4th biopsy, Sarepta added 3 additional independent pathologists to score the sections. Having just one pathologist scoring all the sections appeared to be one of the concerns the FDA had over their original data. 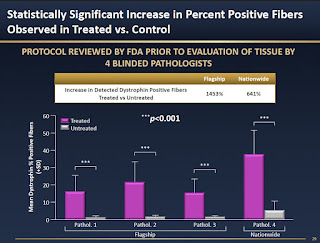 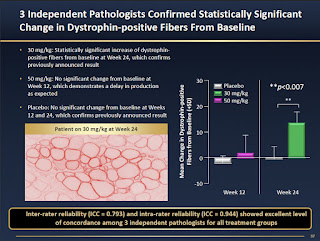 Again, the independent pathologists scored the biopsies in the same direction as the original pathologist, but with a somewhat lower magnitude of change. The consistency of the ability to detect an increase in dystrophin-positive fibers across all the pathologists does give me more confidence in this assay. 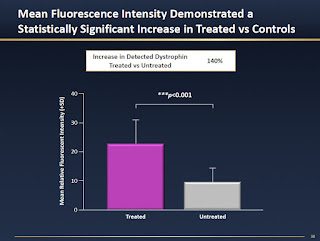 These results are very similar to those they already saw in the previous biopsies. While it's good to see that these results were still consistent at 180 weeks, I was hoping they would also do it with one of the other methodologies used for measuring fluorescence intensity, as mentioned in my previous post.

Western Blot:
4th biopsy
On the call there seemed to be a lot of focus on the Western blot data, and this is perhaps the assay the FDA most wanted to see for confirmation of the ability eteplirsen to produce detectable levels of dystrophin. 9 out of the 11 biopsies showed a detectable dystrophin band compared to 1 out of 9 patients with detectable dystrophin in an untreated exon 51-amenable comparator group. An example western blot is shown here: 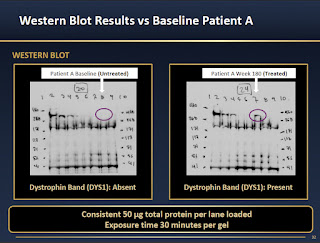 It would appear they performed a standard curve, doing a dilution series of normal muscle tissue in lanes 2-4+, which I was hoping to see. Unfortunately, they did not label this at all, so I have no idea if it is a standard curve, and if so, how much normal muscle protein lysate was loaded in each lane. I was hoping they would present this information so we would be able to get a sense of what percent of normal dystrophin protein they were able to induce. They do say they loaded 50 ug total protein in each lane, which Steve Wilton on the call said was very conservative compared to what others have sometimes used to try to detect dystrophin in DMD patients by Western blot.

I was glad they showed the whole gel, and while it's not a beautiful Western, and the antibody has potentially non-specific bands underneath, it looks clean enough at the expected size for full length dystrophin.

In terms of the 9 of 11 showing a band, again, I was hoping to see a band for all treated patients, but this is probably the least sensitive assay of all of them. I'm not sure if the 2 of 11 not showing a dystrophin band here also had the lowest scores on the IHC/IF assays. They did have 1 of 9 from an untreated group of patients with a detectable band, presumably due to some level of endogenous exon skipping in that biopsy, but there does appear to be a clear increase in treated patients for detectable dystrophin by western blot.

Compared to my expectations, I was slightly disappointed with the Western data, with the understanding that there is expected variability in biopsies. I was also disappointed they did not label the standard curve in the presentation, so we would be able to get a sense of the amounts of dystrophin produced. However, from hearing Ed Kaye talk on this call, and previously, it seems the FDA is looking more for having convincing evidence of production of dystrophin than a specific amount. From that standpoint, compared to their original Western data, the new data does probably bolster the argument that they are truly producing detectable levels of dystrophin in a majority, if not all, patients.

RT-PCR:
They mentioned that they performed RT-PCR on all the muscle biopsies and were able to see the expected exon 51-skipped band. This indicates presence of the RNA that they were hoping to induce. They also sequenced the RNA to confirm the exon 51 skip at the nucleotide level. This is probably the most sensitive assay of the above for even very low levels of the skipped RNA transcript. For RT-PCR I was just hoping to see them perform the assay in all patients, and they did that.

Conclusions:
Before releasing this new data I was reasonably confident they were able to produce detectable levels of dystrophin, but with a number of questions over their methodology. While the updated data didn't address all my concerns, it seems like Sarepta tried to address the major concerns the FDA had, which appeared to be independent review by other pathologists for the immunofluorescence data, and Western blot data on more of the patients. I think the data are mostly positive in terms of validating the assays used, and that they are able to produce detectable dystrophin for long periods of time in a majority of patients. While that is probably the most important information for the FDA, my own optimistic expectations for the data were still slightly higher than what was presented.


Disclosure: I own shares of Sarepta