Final Thoughts on Bluebird Prior to ASH

Here's what I'll be looking for in the ASH data bluebird bio will present over the next week. I thought it was worth a short post since there has been some new and relevant data relating to the BCMA CAR-T program partnered with Celgene, and also there was some confusion before/during their Piper Jaffray presentation over the path forward with LentiGlobin. I previously wrote a more detailed post on the data in the ASH abstracts for bluebird's LentiGlobin gene therapy product here.

LentiGlobin in B-Thalassemia
My main focus for B-Thalassemia will be how the new data influences the development path forward. Bluebird presented at the Piper Jaffray healthcare conference where they tried to clear up some confusion over whether the development path for LentiGlobin had changed. The confusion came from an investor meeting prior to the conference (link). Bluebird reiterated that its development path had not changed. They added that they are constantly trying to improve their products, and they look at minor changes that can be incorporated into the current program, as well as other changes that might be for "next-generation" products that would require a new IND.

Just as a refresher, in May, bluebird gave an update on their regulatory path forward in June after discussions with both EU & US health agencies (link). 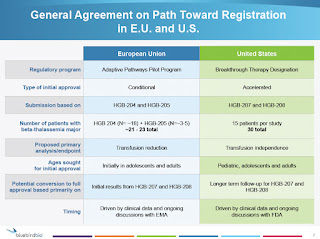 For the EU, they believe they could apply for conditional approval based on their current HGB-204 & 205 studies, which are expected to complete enrollment soon. Importantly, the proposed primary endpoint would be transfusion reduction. For the US, they believe they could apply for accelerated approval based on their pivotal studies HGB-207 and 208, which have yet to be initiated (15 B-Thal patients per study), with accelerated converting to full approval based on longer term follow-up data. For the US, the proposed primary endpoint is transfusion independence. While this was the current thinking in May, the plans were subject to change with further data and discussions with regulators.

Considering the consistent ability, so far, of LentiGlobin to induce transfusion independence in non-B0/B0 B-Thalassemia patients, but not B0/B0 patients, bluebird has mentioned the possibility of developing the product differently for these 2 populations. However, bluebird emphasized it was still too early to be making decisions yet. To completely speculate with this in mind, and the above regulatory outlook, I could see bluebird developing LentiGlobin, as is, for the EU since transfusion reduction is the proposed primary endpoint, and LentiGlobin should cause reduced transfusions in B0/B0 patients as well. For the US, I could see them splitting off the B0/B0 patients, and focusing on the non-B0/B0 patients, which they say are 2/3rds of the addressable population. If, later, they can improve the amounts of T87Q hemoglobin LentiGlobin treated patients produce to consistently 8+ g/dl with either future production tweaks or follow-on products, then I could see them going after the B0/B0 genotype again, with the goal of consistent transfusion independence.

So with this in mind, what I'll be looking for in the B-Thalassemia data from their ASH data is - are 100% of the non-B0/B0 patients transfusion independent (or trending) by 1 year post-treatment, and what is the level of transfusion reduction in B0/B0 patients?

LentiGlobin in Sickle Cell Patients
There has not been as much recent discussion about LentiGlobin for sickle cell disease (SCD), but I'll be looking for longer follow-up on the 1st treated patient on clinical & blood endpoints, and their current T87Q level. I would not expect much of an increase in T87Q at this point, as I've mentioned in previous posts, however, the ~50% T87Q would seem likely to be sufficient for significant clinical benefit.

There will also be a poster presentation with data on at least 2 new patients treated with LentiGlobin. These patients were treated with a lower cell dose than the first patient, and also one patient had a lower vector copy number (VCN) in the drug product. So I will be looking for the levels of T87Q these patients have been able to produce, both in terms of the total amount of T87Q and the relative amount of T87Q to sickle hemoglobin (HbS).

Bluebird has also suggested that they have been performing assays to determine the percent of modified cells, in addition to just giving the average VCN across all cells. This is another way to measure how well they are able to transduce the CD34+ cells with the LentiGlobin vector in their drug product, and potentially track the levels in the patient. I could see this being a useful number to know, particularly for SCD, where in hematopoietic stem cell transplants (HSCT), mixed chimerism can occur, with data suggesting that you only need 10-30% of HSCs to be corrected to functionally cure a patient. I previously wrote about mixed chimerism and other considerations for LentiGlobin in SCD in more detail with Zack, @BioTerp, which can be found here. How much a single copy of the LentiGlobin vector can protect a red blood cell from sickling is unknown, but is likely to be at least somewhat beneficial based on levels of fetal hemoglobin of 30% being known to be protective.

BCMA CAR in Multiple Myeloma
The importance of ASH data for Bluebird's BCMA CAR program has increased, as an additional late-breaking abstract will have 1st in human clinical data of a different BCMA CAR in a phase I trial at the NIH - to be presented on Tuesday December 8th. 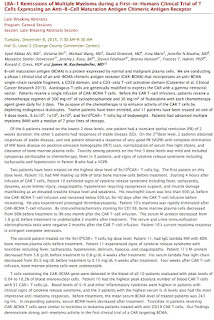 This study comes from James Kochenderfer, whom bluebird has a cooperative research agreement with. I believe bluebird has licensed the BCMA patents from the NIH as well. The BCMA CAR used in this program does have some differences from the one bluebird will use, but considering the relative consistency of the data across different CD19 CARs (CD28 or 4-1BB), there is significant read-through to bluebird's program (comparison of different BCMA programs). In the NIH study, the CAR has a CD28 costimulatory domain, versus the 4-1BB domain bluebird is using. Importantly, in two patients at the highest cell dose given, both had responses, with one patient achieving a complete response. It will be important to see how durable these responses are, and if any additional patients have been treated at this dose, although not much time may have elapsed from when this abstract was submitted. The cytokine release syndrome seen in both patients who received this cell dose is still significant, but was considered similar to those seen in CD19 CAR treated patients. This is probably the most crucial safety parameter I'll be keeping an eye on. I could see this presentation getting substantial attention at ASH, as the expansion of CAR-T therapies beyond CD19 has been a big open question.


Bluebird has mentioned the study in recent webcasts, and I expect them to try to use it to draw excitement to their program. Bluebird itself has 3 poster presentations at ASH on their BCMA program (1, 2, 3), however, I would say none of them really adds that much new data to what they've already presented. On using CD28 versus 4-1BB as a costimulatory domain, it is still too early to tell the differences in safety or efficacy yet for CD19 targeted CARs. A recent preclinical paper suggests that on a per cell basis, CD28 costimulatory cells have greater tumoricidal activity whereas 4-1BB costimulatory cells have better persistence. In the clinic, results using either costimulatory domain have been impressive, but it's still too early to tell if either has an advantage - reviewed here. Despite the potential differences in the CAR construct, my confidence and interest in bluebird's BCMA program has increased after the release of this new abstract, and I will be very interested in any updates from the NIH trial.


Competing Approaches in B-Thalassemia and SCD
Lastly, a big thing I will be keeping an eye on at ASH are data from other approaches in B-Thalassemia and SCD. Specifically, I am interested in clinical data from Bellicum on their approach to make allogeneic HSCTs safer (including in B-Thalassemia and SCD), clinical data from Global Blood Therapeutics on their small molecule drug for SCD, and preclinical data on a different gene therapy approach for both diseases by Sangamo. I discussed them a bit more in my previous post on ASH abstracts. Additionally, Timothy Sullivan had a very good post on Bellicum's approach here. One interesting way bluebird could improve the safety of their approach compared to even the presumably improved-safety allogeneic approach of Bellicum would be to change their conditioning regimen, such as depleting only CD34+ cells, instead of myeloablation with busulfan. This might improve some of the negative effects of the conditioning regimen, such as immune recovery. Bluebird has mentioned this as a possibility, so it will be interesting to follow any potential updates on that, however, this would be a significant change and would certainly be a follow-on product requiring separate clinical development.

Edit: @BioTerp also reminded me about additional similar approaches using viral transduction of HSCs with a hemoglobin (or modified hemoglobin) expressing vector - one being developed by Donald Kohn, whose lab has published many preclinical papers here, as well as another from MSKCC with economic partner Errant Gene Therapeutics. Although I do not believe there will be new data from either group presented at ASH.

Conclusion
There will be a lot of new information coming out of ASH to consider for bluebird - new LentiGlobin data, 1st in human BCMA CAR data, as well as early data from other competing approaches. I'll be looking for more clarity on the development pathway for LentiGlobin, and the consistency of the results given the current treatment protocol. I think the BCMA CAR data from the NIH program might generate additional focus on bluebird's program, and it will be interesting to see how bluebird tries to frame that data in the context of their program.