Juno announced its lead CD19 targeted CAR-T product, JCAR015, in its phase II ROCKET study in adult ALL, was placed on clinical hold (again) after two patients experienced severe neurotoxicity, leading to death. The fate of this program is currently undecided, whether or not it will be modified or shuttered completely. This is after an earlier clinical hold in the same trial after similarly fatal neurotoxicity events. They resolved that hold very quickly by removing fludarabine from the conditioning regimen, which they thought would prevent, or at least reduce, severe neurotoxicity. Unfortunately, this did not appear to be sufficient to prevent this toxicity. Robert wrote his thoughts on the initial hold, and a lot of those concepts are again important after this hold. Juno held a conference call to discuss the hold, which is available here. The following is a quick summary of what they said, and my thoughts on this toxicity and things to consider with CAR-T development going forward.

While Juno still believes that fludarabine was a contributing factor to neurotoxicity, they stated that they always considered it to have multifactorial causes, but hoped removal of fludarabine was a significant contributing factor. They feel that ALL (compared to NHL and CLL) is particularly prone to CAR-T toxicity, both CRS and neurotoxicity, due to the high levels of accessible antigen, which allows for rapid expansion of CAR-T cells, and may lead to toxicity. Other factors are potentially the costimulatory domain used (CD28 vs 4-1BB), dose of cells, and the conditioning regimen, which all can impact the expansion of CAR-T cells. The rapid cell expansion in patients and an early high fever (2-3 days after CAR-T administration) appear to be fairly closely correlated with later development of neurotoxicity, which typically appears approximately 1 week after CAR-T administration and progresses rapidly. Going forward, Juno highlighted the lower levels of toxicity in both ALL and other B-cell malignancies using their 4-1BB CAR-T products with defined CD4:CD8 composition (JCAR017, and non-commercial product JCAR014). The CD28 costimulatory domain used in JCAR015 may lead to more rapid expansion of T cells, and thus potentially more toxicity, although I would not say this has been definitively proven yet.

In terms of how to deal with this toxicity, Juno mentioned that both patients were given an intervention, as per protocol, either with anti-IL-6 antibodies and/or corticosteroids, at the time of their high fevers. Dealing with the subsequent neurotoxicity they speculated would be difficult because it progresses so rapidly that makes it tough to use an intervention, such as a safety switch, to intervene in time while maintaining sufficient T cell activity. They also said this would make it difficult to treat prophylactically with steroids or anti-IL-6, due to concerns it would dampen CAR-T engraftment and activity across all patients.

The question arose whether this toxicity may be due to either on-target off-tumor activity against low levels of CD19 somewhere in the CNS, or on-target on-tumor toxicity from tumor burden in the CNS. Juno did not believe it was due to targeting CD19, either tumor burden in the CNS or off-tumor activity, as they have successfully been able to treat a patient with active CNS lymphoma with JCAR017 without neurotoxicity, although importantly, this is a different CAR product. However, there is some evidence that other therapies that activate T cells against CD19 also cause neurotoxicity. In particular, the CD19-CD3 BiTE, blinatumomab, which redirects T cells to CD19+ cells, has also shown signs of neurotoxicity. In particular, the CNS toxicity has been partially attributed to activating T cells against CD19 positive cells in the CNS causing cytokine release and disruption of the blood-brain-barrier, although I have not seen the primary data indicating this is the definitive mechanism. 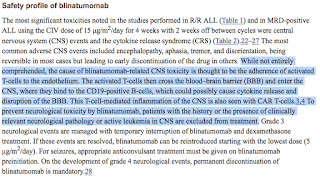 Some evidence that neurotoxicity is not due to CAR activity against CNS disease comes from studies of CARs against other targets that can also induce neurotoxicity as an adverse event. In particular, two early studies of BCMA-targeted CARs in multiple myeloma have found that both a CD28 CAR as well as a 4-1BB CAR could cause neurotoxicity after large expansions of CAR-T cells. Strikingly, the 4-1BB study did not use any pre-conditioning chemotherapy, demonstrating that at least for this CAR, you can have significant CAR-T cell expansion and toxicity in the absence of conditioning. Surprisingly, a new 4-1BB anti-BCMA CAR from Bluebird Bio has recently shown responses without grade 3 or higher CRS or neurotoxicity in early initial clinical data, which I write about more in a post here. While very promising, it is too early to say if this construct will have a better safety profile than others, and what are the reasons for lower toxicity. Multiple myeloma only very rarely enters the CNS, so it is unlikely that the neurotoxicity is due to BCMA+ myeloma cells in the CNS. However, soluble BCMA can exist in the CSF. Soluble antigen, in general, is not thought to significantly interfere with, or activate, CAR-T signaling, such as in a mesothelin CAR:

This has been found to be true for other CAR-T targets as well that can exist as soluble antigen, with the thinking being that a multimer of the antigen is required for stimulation of the CAR.

My thoughts on future CAR-T development:
Other groups (such as Kite/NCI) using CD28 CARs appear to have not had as significant troubles with neurotoxicity, even though they also use cyclophosphamide and fludarabine for conditioning. As Robert had previously discussed, an additional factor to consider, although we have no sense of whether it is playing a role, is the manufacturing process of the CAR-T cells leading to additional differences between the different products. 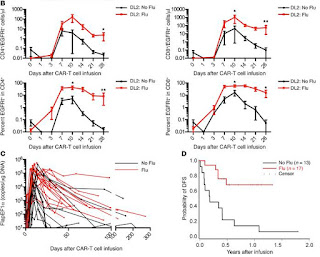 Going forward, synthetic biology tools or CAR constructs that would allow for a consistent, but less rapid, increase in CAR-T expansion may be useful to get sufficient activity and persistence but reduce excessive toxicity.

Another area that may be worth exploring is to try to identify ways to better separate the activity of CAR-T cells from the causes of cytokine release syndrome and neurotoxicity. For instance, IL-6 may be dispensable for CAR-T activity, but contributing to CRS, so anti-IL-6 antibodies might be able to be used more aggressively. However, the spike in IL-6 during CAR-T expansion may not be coming from the CAR-T cells, so knockout of IL-6 in CAR-T cells may not make for a safer CAR-T product. Continuing to look for ways to separate activity from toxicity in CAR-T cells to either engineer safer T cell therapies or allow better prophylactic toxicity management will probably be important in the continued development of these therapies.

In summary, I think it is still not extremely clear why Juno has, particularly recently, been running into such severe neurotoxicity in their JCAR015 trial. I thought removing fludarabine would lead to poorer activity and durability of responses, but would, at least substantially, reduce the levels of neurotoxicity, as fludarabine appeared to allow for significantly increased CAR-T expansion. However, there are clearly other factors that are important for modulating rapid CAR-T expansion, and whether or not rapid CAR-T expansion is even the primary factor leading to neurotoxicity is still unknown. The potentially better safety profile of the JCAR017 program as well as CD19 programs developed by others suggests that neurotoxicity may be particularly problematic for JCAR015, but I would say it's too early to draw strong conclusions. Even these other programs have severe CRS and neurotoxicity, so there is still a lot of work to be done in continuing to improve the safety of CAR-T therapies while maintaining their efficacy.